Douglas Volk’s path as an artist was secured early in his life, following instruction in Italy and in Paris with renowned painter and teacher Jean-Leon Gerôme. He held prominent teaching positions at the Cooper Institute, New York; the Art Students League, New York; as the founder of the Minneapolis School of Fine Arts; at Cooper Union, New York and at the National Academy of Design, New York. It was during a break from teaching from 1898 to 1906 that Volk and his wife, Marion Larrabee Volk, purchased Hewn Oaks, a large property on the shores of Kezar Lake in Lovell, Maine that became their beloved summer retreat. Marion Volk described Hewn Oaks to a journalist: “It is this out-of-door life we enjoy most and so you will find the whole place uncitified. It is just as close to nature as we can make it, to live comfortably, and when we built our house we decided that should be in keeping with this idea.” The Volks founded the Sabatos Handicraft Society in Lovell, an arts and crafts movement that engaged Marion Volk, their children, friends and neighbors. Douglas Volk focused on easel painting during this period, taking inspiration from the surrounding woods and Lake Kezar. 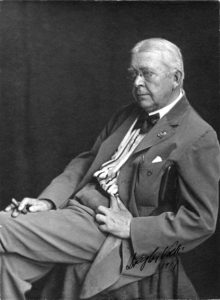